The 5 Best Explainer Videos (& How to Make Your Own)

What is an explainer video?

Explainer videos are short online marketing videos used to explain your company’s product or service. Explainer videos are often placed on a landing page, your website’s home page, or a prominent product page. These types of videos have become extremely popular – some sites boast of conversion rates increasing by as much as 144% after including an explainer video on their website.

An explainer video for Crazy Egg

There’s no arguing that online videos are fantastic assets for a business. The question is – how do you get your own explainer video?

Today we’ll be looking at:

With these types of promo videos becoming ever more popular, there are plenty of top explainer video examples to choose from. We’ve got a few favorites to show you.

With their video title, “DollarShaveClub.com – Our Blades Are F***ing Great,” you know Dollar Shave Club is going for something edgy. They follow through and go all-in with this wacky video, which we also featured in our blog post about funny advertisements. What makes this explainer video work so well? Dollar Shave Club knows their audience really well, down to a tee. Their market is 20-30-something year old men who would be open to the idea of ordering a steady supply of razors online. The video’s language and humor matches their ideal audience perfectly.

Dollar Shave Club is a great example of a well-structured explainer video. They start with a brief overview of the service (get great razors delivered to your door for $1/month), they introduce the problem (most blades are too expensive, have un-necessary features that jack up prices, and it’s easy to forget about buying new razors), and re-iterate the solution their service offers (cheap blades delivered monthly to your door).

PooPourri is successful for many of the same reasons Dollar Shave Club is, and it’s no surprise that their styles are quite similar. You’ll notice that PooPourri’s explainer video is largely live action, but switches to some animation to show the intricacies of how PooPourri works (no one wants to see a live action load dropped into a toilet). Also, check out that big green button at the end of the video – it’s begging to be clicked, ending with a strong call to action.

It’s worth noting that matching this tone of humor for your own explainer video would be quite difficult – most businesses will be better off more subtle humor. PooPourri is an outrageous product, so their humor can be outrageous as well.

Mint is a perfect example of why some businesses are much better off with animation rather than live action. Mint takes advantage of animation to illustrate how it draws financial info from different parts of a user’s life and curates it all into one setup. Mint’s animated explainer video also uses screenshots of the actual product, familiarizing viewers with the product’s design and arrangement.

Airbnb uses a cool combination of live action and animation to show the unique (and reasonably priced) experiences obtained by using Air Bnb. This explainer video does a great job of showing the perks of the Airbnb system while also explaining them verbally.

Spotify relies exclusively on fun animation and a rockin’ soundtrack to explain their digital music service. The video matches the lively music with fast paced cutting, and the video’s color scheme fits perfectly with the Spotify design, so we already feel familiar with it. Not much needs to be said; Spotify doesn’t over complicate, instead relying on a tune and a few lines of text to show that they’re all about the music.

Do you have any favorite explainer video examples you recommend? What do you like about them? Let us know in the comments!

How to make an explainer video

We’re going to take you through the steps of how to make your own explainer video! It’s no easy task, requiring a ton of focus and effort, but we can guarantee it’s worth the work.

The script is the most important element in creating a good explainer video. Your explainer video could have the coolest graphics and most Morgan Freeman-esque voiceover in the world, and it wouldn’t mean a thing without a solid script to get behind.

The script is where you’ll need to spend the majority of your focus. It’s best if you write your explainer video script yourself (even if you choose to hire a production company). You know your target customer’s concerns and pain points better than anyone else, and the video is where those concerns need to be addressed. What freaks out your potential customers? What confuses them about your product or offering? If you haven’t already done some research to answer these questions, now is the time to consider surveying your audience and figuring this out.

1. Quick overview of your product and what it does

3. Answer the problem with your solution (via product or service)

4. Call to action (e.g. sign up for our free trial by clicking here!)

Once you have a script, you’ll need a voiceover. Some options are:

Voices.com: This site has a large network of professional voice actors to choose from.

Craigslist: Ah yes, old reliable. You can find just about anything on crazy Craigslist, including voiceovers.

Fiverr: Yup, you can get a decent voiceover for your explainer video for just $5 on Fiverr! You’ll probably have to pay a bit more than that ($5 is usually the starting price – some charge by the second, others by the word. Chances are you won’t be in the lowest price bracket). Still, you aren’t likely to find a voiceover anywhere for cheaper. 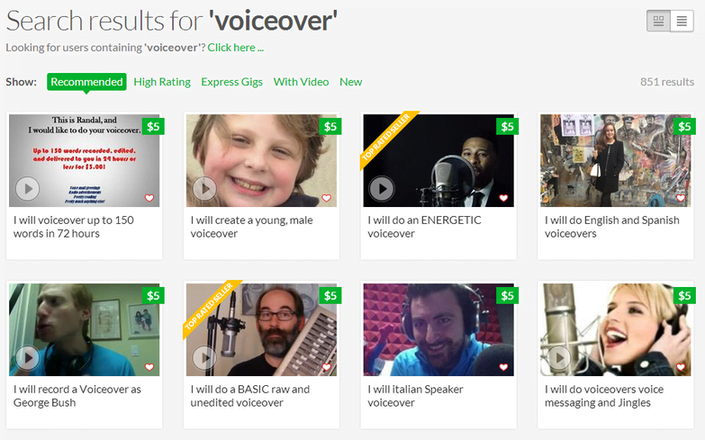 There are a number of different paths you can take when it comes down to the actual creation and production of your explainer video. Options include…

Bring Out the Pros: There are some very talented professional video production companies out there that can help you make a killer promotional video. You’ll have some high explainer video costs if you go this route – be prepared to shell out anywhere from $5,000 – $20,000 for a service like this. The advantage is that you’ll have video experts helping you every step of the way, and you’re video is guaranteed to look great. Demo Duck, Wyzowl, LessFilms, Flikli, Explainly, and Studio Pigeon are a few explainer video companies to consider.

Pow Toon: if you’re making animated explainer videos, have no animation experience, but want to do it yourself on a budget, Pow Toon is the way to go. Anyone with some basic computer skills can use this animated explainer video software. It likely won’t be a masterpiece, but it’s easy to create and free (to start at least). They even have a tutorial series to walk you through building your creation.

DIY Explainer Video with iPhone: That’s right, you can film your own explainer video on your iPhone! This awesome post from Wistia will show you how. DIY filming is a great way to create cheap explainer videos. For the editing, iMovie or Camtasia are good choices. If you want to take on a DIY animated explainer video, this animation toolkit from Salsify can provide you with a ton of great animation tools and resources.

Hire a Freelancer: Experienced freelancers can provide high-quality explainer video production assistance at a much lower cost than a large production company. You should be able to find one easily enough on craigslist or other freelance sites.

Crowd Sourcing: One option you might give a go is the video crowd-sourcing company Video Brewery. Submit a general project overview and receive a bunch of proposals from Video Brewery’s network of trusted freelancers. Choose one you like and you’re on your way! Video Brewery notes that these explainer video costs usually run somewhere between $3,000 – $5,000.

Remember to read the fine print carefully on these sites with regards to what is or is not permitted under the sound file’s licensing agreement. Some are a cheap one-time purchase and royalty free, others require attribution, etc. Use our handy guide on how to use music in ads (without getting sued!) for help with this.

Step 5: Measure the performance of your explainer video

Measure video engagement and be ready to tweak the heck out of your video. You’ll be able to see some solid data with YouTube Insight, but Google Analytics can take you even deeper down the rabbit hole, so long as you’re game for setting up nifty custom event tracking.

Imagine seeing plays, pauses, how many viewers hit the 30 sec. mark vs. 60 sec. mark, etc. Wistia has some nice analytic tracking options too, and also makes it easy to sync up Wistia and Google Analytics.

Now enjoy the advantages of your new explainer video!

Explainer videos have a ton of benefits, such as:

Now go forth and create some killer explainer videos! Let us know how it goes.

Megan Marrs is a veteran content marketer who harbors a love for writing, watercolors, oxford commas, and dogs of all shapes and sizes. When she’s not typing out blog posts or crafting killer social media campaigns, you can find her lounging in a hammock with an epic fantasy novel.

See other posts by Megan Marrs